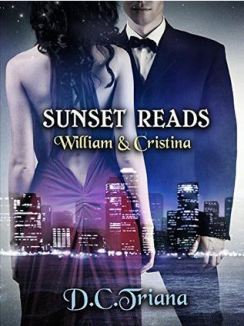 Source: Received a copy as a gift for an honest review.

Sunset Reads is a story about two people falling in love. I do say that William Jameson’s mother was probably dancing up in heaven watching everything unfold, though I do hope that she looked elsewhere on the more private scenes and scenes of people getting hurt. 😉

To be honest, the synopsis for the novel did not grab my attention. It sounded too much main stream but I loved the cover and asked the author if I could read it. Boy, was I happy to read the romance unfold. Yes, there were times when I wanted to take a pause from it because it has long paragraphs, but I did read it in one sitting with some popcorn on the side. Another thing that bugged me was the use of ‘you’re’ when it was supposed to be ‘your,’ but hey typos happen so I focused on the scenes and it was like I watching a movie. Well done!

The pacing was perfect and the novel ended on a good note.

Now onto the characters. This novel has the couple as the main characters of the novel and enough of side characters that helped out the plot. Of course, I hated William’s step-father and guess what? We’re supposed to hate him! ^_^ One of my favorite side characters was Cristina’s brother, Henry. I’m wondering if there will be a novel about him and one of Cristina’s best friends unless I’ve read the hints wrong. The others were good for the story.  Oh, and I found Cristina’s dog, Obi, adorable. I’m very happy that nothing bad happened to Obi in the novel because if it did, I probably would have abandoned reading right then and there.

I did google on how a a white and brown Lhasa Apso looks like and found a lot of very cute dogs. I really want to pet Obi now (though probably the real one because D.C.Triana has her own Obi. So cute!

I highly recommend to the readers  (18+ years) who love slow  romance that turns steamy.