Posted on October 6, 2016 by kernerangelina 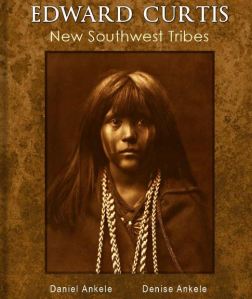 The book starts with a biography about Edward Sheriff Curtis by Zanne Dailey. Zanne tells us about how Edward got into photography and how eventually started taking photos of tribes and landscapes. The time period is in the late 1800’s. Past his twenties, Edward met C. Hart Merriam, head of Biological Survey and cofounder of the National Geographic Society. That was interesting! He also met other famous people. Lucky man. Those men, like Bird Grinell, really pushed him forward in his career.

In 1906, he was given $75000 by J.P. Morgan to create a series of books about North American natives people. Amazing! and at that time! It span over a 20 year period and he worked with anthropologists to also document the peoples histories.

Edward lived till age 84 and died in Los Angeles.

After the biography, there is a section about the Acoma tribe. That’s when the first photographs appear in the book. They are really beautiful and tell a story about the Acoma people. Powerful.

Then there’s a section on the Apache and the other tribes. Really interesting and a nice time spent looking at the photographs and reading short histories.