Posted on January 6, 2017 by kernerangelina

Today, I want to bring up a sort of a personal topic. I hardly ever get personal but for whatever reason, it’s the new year and I want to share my music experience with you.

I came to Unites States when I was 9 years old. Before coming here, the only musicians that I heard of where: 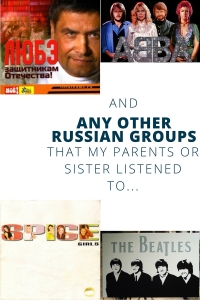 Not a lot, huh? Also, not really good music for kids…

I knew NO English when I came to this country. There were only two words in my vocabulary – cat AND dog. Didn’t help with making friends or understanding teachers who spoke English half of the time…the other half was spoken in Spanish (that was before we moved to another area).

After we moved to a new area, my father gained an awesome best friend, who to this day, I call Uncle. He was the first person to gift me a CD. Can you believe it? My own CD! I was so excited. I felt like I was growing up and I could own my own CD’s. Boy, was I also excited when I got a CD player. Do any of you still remember those? They were after cassette players and before iPod.

At that time period, these where the bands that the young were listening to:

So back to my first CD. My first CD was of Britney Spears. What was your first CD?

I listened to all of the songs, translated them, danced to them and was super excited when McDonald’s shared Britney Spears/NSYNC VHS with their meals. I have no idea where the VHS is at the moment, but it’s somewhere in the garage.

I, of course, had my parents get me her next album – Oops I did it again. AND- I just had to have those doorway streamers. My cat loved it! It took me a while to realize that they are annoying, loud, and in the way, but I had to have them.

I may have the third CD somewhere around the house and later with iTunes help, I downloaded her music. I still listen to her music to this day and it’s not surprising that when I think about my book characters, some of her songs come to mind.

In my work in progress (mafia story line), a college girl falls for the bad boy, a Mafioso. When I was writing the novel, her song “Criminal” had come out and I was like “Oh my god! What a perfect song to describe the character’s emotions!”

In my novella (Seven Hours: Challenge Accepted), the  main character is blind. After I finished the novella, I realized that a good song to go along with it would be “Overprotected.” Coincidence?

The point is that we as writers may not be aware of outside influences on our minds from other sources. I was certainly surprised that the very first song artist that greeted me in United States would be coming back to my life through my writing. Yes, ideas are mine and I owe them completely, but it’s nice to know that I can still connect to the first music artist. I may not know modern song writers, but I can still connect with Britney. Thank you to Britney for still being out there.

Well, I just have to mention my 2nd edition of Deity’s Soulmate. I would say that if I connect it to her music somehow, it would be with the song “I’m not a girl, not yet a woman.” Gardenia, the main character, goes through years of training and with her relationship with her family, it made her grow up hard. It takes a while for her to realize that she’s not yet a woman until she meets her soulmate… cheesy I know, but hey it works. Life struggles.

So, I have a question for you guys.

What was your first CD? Favorite artist? Did that artist influence you in any way? Can you still connect with them when you’re feeling down? If you’re a writer, is there a song writer who speaks perfectly for your characters?

Thank you for reading and have a happy weekend!

← The gift of short story for Tammy @ a word about books
Book Review: The Girl Who Could Change Fate →

2 Comments on “My music influence”